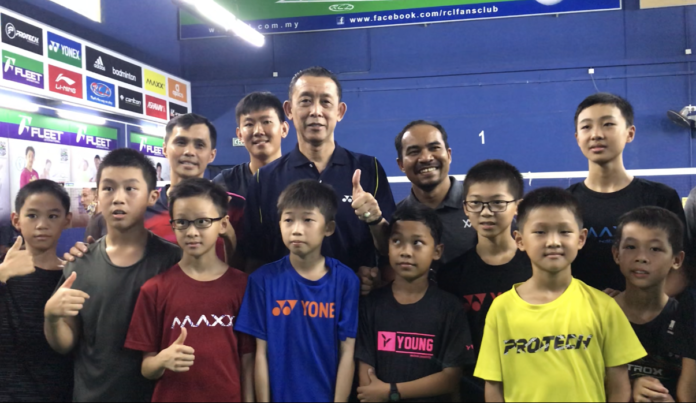 It was voiced out by the national badminton legend Datuk Misbun Sidek when met at the Manjung Open Youth Badminton Championship. He wants Malaysia to look for specific formulas so that the country’s badminton athletes continue to be recognised internationally.

The Manjung Open Youth Badminton Championship was organised by Bandar Baru Setia Awan Perdana, an affordable township founded by Taraf Nusantara Sdn. Bhd., the largest developer in Perak. The first Manjung Badminton Open organized by BBSAP received more than 250 participations from all over Peninsula Malaysia including Perak, Kedah and Terengganu.

Misbun added, in order to achieve this goal, he has developed a series of customised training modules that can be used by all coaches including providing training in line with the national coach team.

According to him, the training module was a significant contribution to this sports in Malaysia.

“It’s time for Malaysia to find a formula where all badminton coaches use the same training modules to produce world-class athletes.

He added, “I have provided a series of training modules that had always been used before and had produced athletes such as Datuk Lee Chong Wei and other great players who have won championships around the world.”

Misbun, who was recently appointed as the National Youth Development Director of the Badminton Association of Malaysia (BAM), said the training module was his huge ‘legacy’ in the prestigious sporting field when his coaching days comes to an end.

“I won’t be here forever, but the modules I provided could be used by other coaches.”

Misbun added, “Even if my time is up, at least my contribution can continue to ensure that the country’s badminton field continues to attract global sports fans.”

Meanwhile, Misbun, who was the ‘key person’ behind Lee Chong Wei’s success, said Malaysia needed to continue sending its national athletes to compete internationally to keep the country at the top.

In that regard, he believes that the organization of badminton championships, especially the Manjung Open Championship, includes various programmes that are currently underway and will be held especially in Manjung, will dazzle the country’s badminton field.

He added that the modern-day training facility, Misbun Sidek Badminton Hall, located in the New Bandar of Setia Awan Perdana, Sri Manjung is believed to be able to instill the spirit of sportsmanship among talented individuals once it is fully completed next year.

In that regard, Misbun greatly appreciates the developers’ initiative to use his name for the badminton hall and hopes to provide knowledge to young people in the city through training and badminton clinics.

BBSAP was recently awarded the first phase of the Best Affordable Home Development in the 2019 iProperty Development Excellence Award (iDEA) 2019.

BBSAP was recently awarded the first phase of the Best Affordable Home Development in the 2019 iProperty Development Excellence Award (iDEA) 2019.

BBSAP is the largest planned township in Perak with over 10,000 houses built at affordable prices. The award is the result of a team’s success in timely planning, mapping and city construction.

The first phase of the BBSAP project started in 2016, offering five-star amenities such as club houses, government offices and a tropical lake park.

The project involves an area of 1,012 acres where the first phase of 1,147 units of 73 acres has been completed and the next phase will be completed within three to five years.

BBSAP is strategically located for homeowners to invest in a second home ownership programme besides its location which is next to the WCE highway connecting Kuala Lumpur-Manjung and Manjung-Penang.

Manjung is now the heart of Perak, known as a tourism and maritime hub with thousands of tourists visiting Lumut and Pangkor Island over the weekends.