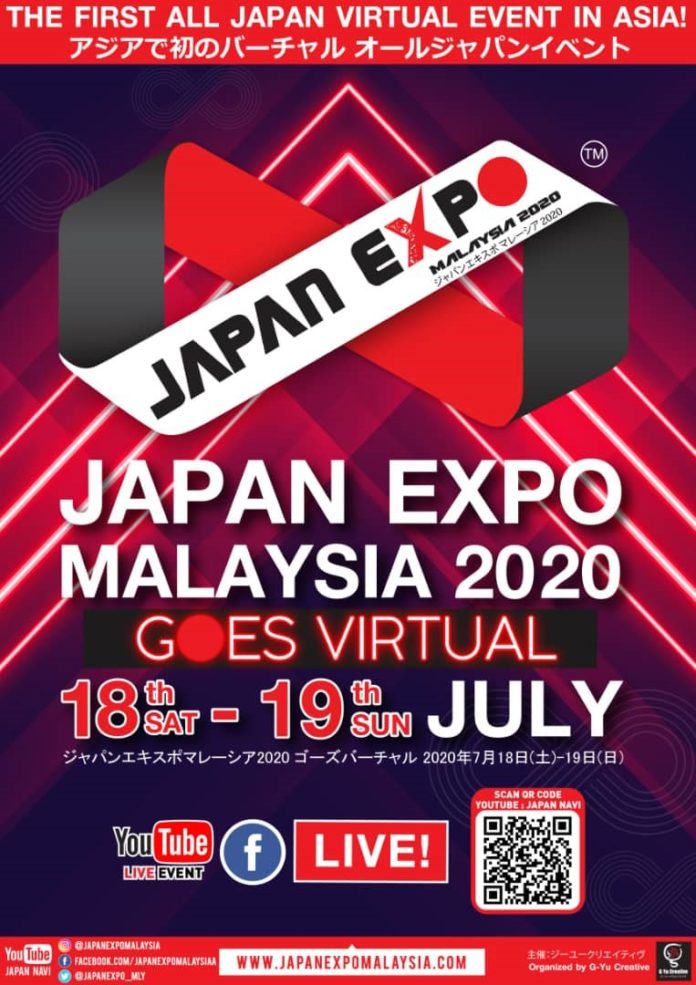 Kuala Lumpur, 20 July 2020 – JAPAN EXPO MALAYSIA (JEMY 2020) made its virtual debut on 18th July ,2020 with a massive response from the audience. The viewers who turned into the JEMY ‘s social media networks were treated with a surreal  experience of Japanese culture, martial arts, cosplay, food, travel and education and product showcase.

The virtual expo was compact for two days in a row boosted by various headliners. The event kicked off with a message from G-Yu Creative Co., Ltd, the main organizer and relevant Japanese government authorities in Malaysia, including Embassy of Japan, JNTO, JETRO, JFKL, JACTIM and GACKT, a well-known rock artist. The expo which was categorised into two stages, KAZE and SORA were interspersed with live demonstrations, musical concerts and Japanese business segments.

Augmenting the spirits further and like an icing on the cake, SKE48 and JKT 48 served up a brilliant act with their melodious and fast paced renditions. The first virtual debut concert by the sister group of AKB48 received overwhelming response from the viewers hailing from various regions. JKT48 surprised the audience with a string of AKB48’s hits delivered in Indonesian language and their recent release, ‘Rapsody’.

Besides the musical extravaganza, the business segment also included a live demonstration by Nucre Pâtisseries on wagashi marking an informative session about the famous Japanese delicacy, a Kimono demonstration by Kuma Yukata followed by a presentation by Nippon Designers School that offered illustration, graphic design, comic & manga courses to students. Mr. Thomas, a certified Sake Educator gave audience insights on the health benefits of the Japanese beverage. Other presentations included the auction of awarded cloth for charity by Sakura Collections and Japan Real Estate by Land Housing.

A proud moment was showcased through the playback of the Manga Award Ceremony where Japanese Ambassador Oka presented the prestigious award to Mr. Lam Quek Chung, Malaysian artist behind the now famous Detektif Hantu: Kesumat comic.

The global expo also broadcasted a campaign by the Agency of Cultural Affairs of Japan, MyIPO and CODA where they promoted the importance of copyright. The agencies are also giving out 10 limited edition of Hello Kitty Prizes for each quiz and questionnaire to respondents who will be chosen by lot. More information could be accessed at:- http://www.japanexpomalaysia.com/myipo/?fbclid=IwAR08lOh2kgiAkFg4GUeA-oSb2k7ez7DjclGNmZDdfhEXo2PTIsPN-6xzacA

The virtual event which was peppered with various contests also saw two lucky winners grabbing the Air Asia flight ticket from Kuala Lumpur to Tokyo /Osaka.  Viewers also stood a chance to win a Nintendo Switch Lite through purchase of any OYOSHI products on their e-commerce site, and Pavilion’s dining voucher on Tokyo Street.

During the pandemic, the demand for usage of food delivery services has increased in Malaysia. JETRO, one of the participants of the expo also introduced their programme which aims to support Japanese restaurants in Malaysia. This programme in collaboration with GrabFood will further promote Japanese food in the country. Another Japanese governmental agency, JNTO KL also took part to promote famous travel destinations in Japan.

Start-up companies with innovative ideas were in for a surprise when the INNO-vation Programme was announced on SORA stage. The programme supports disruptive ideas with a generous funding and registration is open for the applicants from 1 July onwards until 31st August 2020. More information could be obtained from : https://www.inno.go.jp/en/.

The same amount of enthusiasm was felt throughout the show as the virtual broadcast was filled with exciting contents. A breathtaking Kooya traditional dance showcase further increased the palpable energy of the viewers. The dancers were all geared with colorful attires and gave out a brilliant performance. Sensei Kariyazaki Shogo mesmerized the audience further with his beautiful flower arrangement techniques that took them by awe.

The two day spread of event got even spicier with appearance of Aya Ogose, the smallest big eater challenger who amused viewers online when she ate enormous amount of sushi. Gachapin & Mukku, the favorite Japanese television characters of Fuji TV also made their special appearance in the expo.

JEMY 2020 GOES VIRTUAL organized by G-Yu Creative Co., Ltd, supported by Embassy of Japan Malaysia, JNTO KL, JETRO KL, JFKL, JACTIM and Tourism Malaysia was a phenomenal success with global audience streaming in during the weekend. “The support was fantastic, just what we needed in such challenging times. We would like to thank the exhibitors and artistes for pulling together this virtual expo” said Yupharet Eakturapakal, the CEO of G-Yu Creative Co.,Ltd.