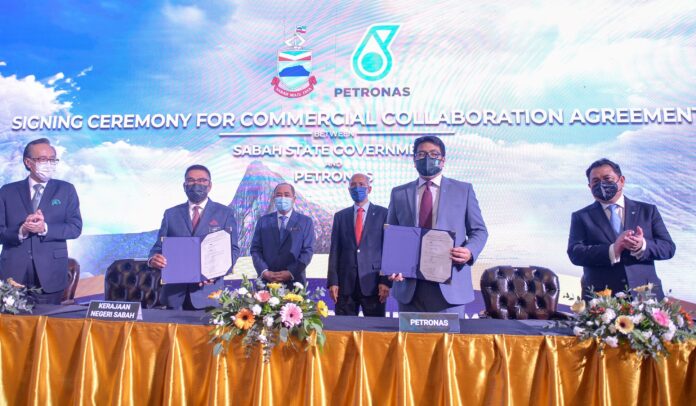 Kota Kinabalu, 8 December 2021 – The Sabah State Government and PETRONAS are pleased to announce the signing of a Commercial Collaboration Agreement to further enhance the collaboration between the two parties in developing the oil and gas industry in Sabah.

The Agreement, which was concluded under the steer of the Federal Government, is a testament of an expanding mutually beneficial relationship between the state and PETRONAS, as the national oil and gas corporation, in responsibly realising the full potential of the domestic oil and gas industry. Specifically, for the State of Sabah, the objectives of this Agreement are to increase the revenue for Sabah from oil and gas production in the state by increasing its participation in the oil and gas industry and its value chain and to have greater involvement together with PETRONAS in the oil and gas development in the state.

The State of Sabah, through its nominated State-Owned Entity will have the opportunity to increase its participation in upstream petroleum arrangements including in partnership with PETRONAS Carigali Sdn Bhd, the wholly owned subsidiary of PETRONAS, as well as in the midstream and downstream oil and gas businesses within the state.

The signing of this Agreement marked a new chapter of a closer collaboration between the Sabah State Government and PETRONAS. Towards achieving this objective, a consultative framework will be established whereby both parties will jointly engage on matters of importance to the industry to maintain a sustainable, conducive business and investment environment for the benefit of the state and the nation.

Biz newstreamasia - January 20, 2022
KUALA LUMPUR, 20 January 2022 - NexMind AI has further cemented its position as an exciting and innovative player in the big data analytics and...

Biz newstreamasia - January 20, 2022
Pulau Pinang, 20 January 2021 – After the re-launch of their brand, Nutribear has seen sales soar for the past six months especially when customers...