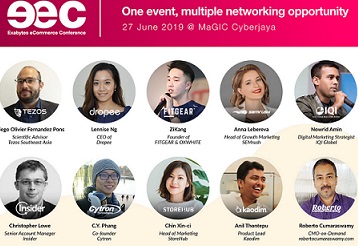 This year, EEC expects to attract at least 800 attendees of startups and small- and medium-sized enterprises (SMEs) from various sectors not just from Malaysia but from around the world. The one-day event is going to be packed with presentations and workshops by esteemed speakers from various industry backgrounds. Besides that, there will be at least 20 exhibitors of organizations that will take part in this year’s EEC.

More speakers will be announced from time to time.

Chan Kee Siak, CEO of Exabytes said, “EEC is back for the sixth time and with a bigger goal to inspire startups and SMEs to grow their business beyond Malaysian borders. Since it started, EEC has been gaining momentum as a platform for startup entrepreneurs, C-level executives and other attendees to share, learn and network. We look forward to hosting them on June 27 in Cyberjaya.”

“Thriving ecommerce presents opportunities. There is so much to learn about it so we’ve planned to cover a variety of topics such as analytics, big data, elogistics and mobile payment technologies. We are currently offering early-bird promo tickets and those who are interested can purchase them online at www.exabtyes.com/eec,” Chan explained.

Started in 2014 with only 100 attendees, EEC has grown to be a popular ecommerce event in Malaysia attracting participants from around the world. In 2019, EEC targets to more than double its attendees from 396 in 2018 to a minimum of 800 this year.